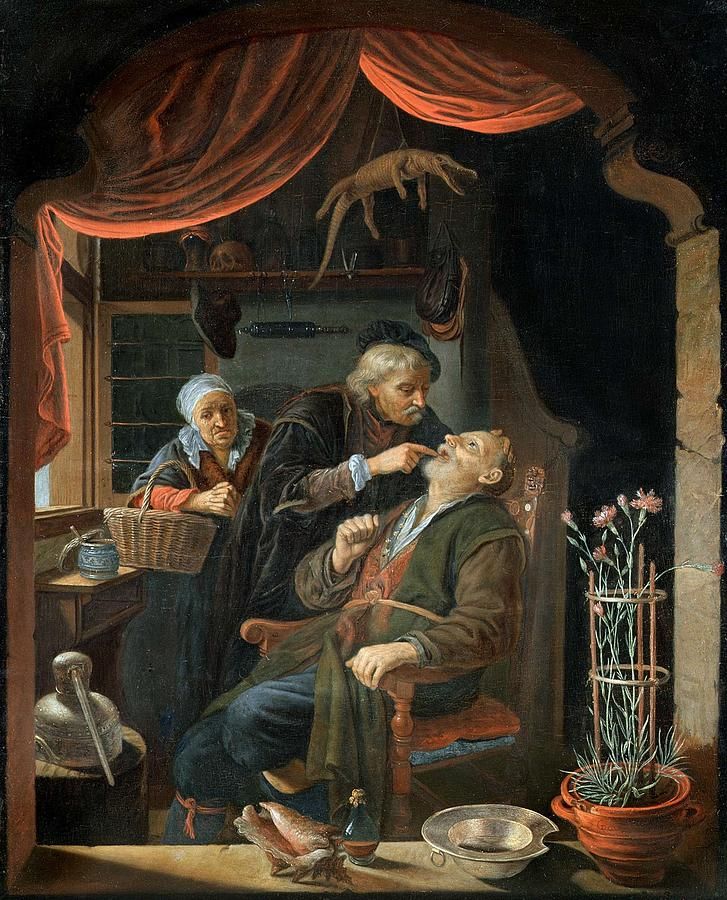 The history of dentistry begins with the first records of toothache made about five thousand years ago in Mesopotamia. The Sumerians wrote about demons and tooth worms that caused tooth decay. People then prayed to the gods to cure them of their painful toothaches. But the main and only job on the teeth was just to get them out. Suppression of toothache was achieved by various preparations, of plant or animal origin.

The first dentists appeared in Egypt around 2600 BC. One of the best was called Hesi-Re. About five thousand years ago, the Chinese treated toothaches with substances such as arsenic, which could relieve pain but also kill the patient. Acupuncture was also used to relieve pain.

The ancient Greeks believed that all diseases, including dental, stem from an imbalance between the four body fluids. Because of this, bloodletting became a popular method of treatment that remained in use until the early twentieth century.

The first dental bridges were invented by the Etruscans between 1000 and 400 BC. They associated gold rings with healthy teeth, and today’s dental bridges are descendants of those early dental aids.

The Romans conquered the Etruscans and later invented golden crowns, methods for fixing teeth, and artificial dental aids made of bone, wood, or ivory. Many Roman physicians specialized in dentistry. Aulus Cornelius Celsus was the first in the first half of the first century to fill the cavity with a mixture of cloth and lead which he pressed into the hole with tweezers. In the seventh century, the Chinese filled cavities with a mixture of silver, tin and mercury, or amalgam, as dentists call it. Dentists in the West began using it only a thousand years later. At the same time, in 1498, the Chinese invented a brush that resembles modern brushes. The handles were made of bamboo or bone, and the coarse hairs of wild boars were used for brushing.

It is a surprising fact that already in the 7th century. pr. Kr. The Etruscans used ivory and bones supported by a gold frame as a tooth extension. These were the forerunners of today’s fixed bridges. Medieval so-called “Barber surgeons” were not able to completely replace lost teeth, so it will be several centuries before the first more successful production of false teeth from metal and ceramics.

Dentistry began to take its modern form in 1728 when the Frenchman Pierre Fauchard published his work “Dentist Surgeon”, for which he was later recognized as the founder of modern dentistry. In his work, he described the signs and symptoms of various oral diseases, methods of dental treatment, and methods of tooth replacement and tooth transplantation.

Dentistry flourished during the Industrial Revolution, especially in the United States. The first cleaning of dental canals was performed in the 1830s.

X-rays led to a revolution in medicine in 1895. A year later, the first X-rays of the teeth were made. That was the beginning of modern dentistry.

In the early 20th century, the use of fluoride, one of the ingredients in tooth enamel, began in the United States for the purpose of fighting dental disease. During this period, teeth whitening also gained its first popularity.

One of the most famous owners of “false teeth” was the first American president George Washington. Such metal and ceramic restorations will move into mass use in the 20th century, after the invention of the technology of precision casting of crowns and bridges.

History of dentistry in Croatia

Dentistry in Croatia (Wiki) has developed in a comparable way as in other European countries, and according to social and material circumstances. Since the 13th century, coastal towns have had permanent physicists, surgeons, pharmacists and barbers (lower surgeons) in their service, and in 1777 Dubrovnik was the first to establish a dental service as a separate branch of general health care. In the mainland of Croatia, dentistry developed later, and at the end of the 18th century and the beginning of the 19th century, for example in Zagreb, there were people who were exclusively engaged in dentistry, and in the 19th century they were also called city dentists. The work of educated dentists, at that time mostly foreigners, was individual, independent and based on earnings. The public dental service has been developing faster since the 1920s (school, city, state polyclinics). Polyclinics were established in large centers (Osijek, Split, Rijeka and Zagreb), and only in Zagreb was the Dental Clinic (1931). Specializations of certain dental branches in Croatia have been starting since 1959.

Dentistry is still evolving. Today we use laser technology. In the future, genetic manipulations may completely prevent tooth decay. In any case, thanks to modern technologies, the physical pain associated with dental procedures is becoming less and less, and with it the fear of visiting the dentist.

The twentieth century has brought great changes in the quality of life and smiles. The ideal of beauty has changed greatly resulting in new reasons for visiting a dentist. While only a hundred years ago people went to dentist  to remove pain and enable a chewing function. Today dentists are more and more visited for cosmetic reasons, more precisely to achieve a perfectly beautiful smile.

People who have lost all or most of their teeth, who are not happy with their existing dentures, or people who have very bad teeth, most of whom are meant to be extracted and want to put a natural smile back on their face, are ideal candidates for implants that today perfectly imitate natural tooth roots